Begin typing your search above and press return to search. Press Esc to cancel.

It took the strength and precision of two 50 tonne cranes to lift the 75-foot hull from its mould on June 13.  The 75 Enclosed Flybridge is the flagship of the Riviera fleet and hull number three has undergone a series of custom design features for its Dubai owner, including full hull windows allowing every stateroom a view from the generous fitted glass hull window.

This new model will feature a range of customised options including a walnut semi-gloss finish throughout.  Riviera’s exclusive Dubai dealer, SF Yachts, is overseeing the construction of hull number three and looks forward to this boat’s international premiere at the Dubai International Boat Show in March 2015. 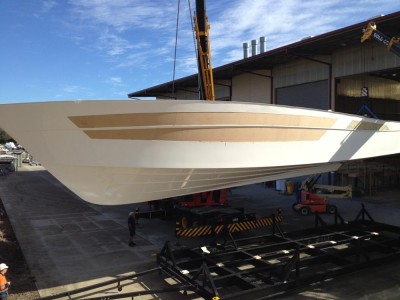