Begin typing your search above and press return to search. Press Esc to cancel.

Circumnavigate Australia and you’re bound to have some interesting tales to tell and experiences to share. Experience is following the journey of Andrew Luxton who, with a rotating crew, set off in January on the first leg of a 9000 nautical mile trip around the nation … inspired after hearing of the journey from veteran seafarer and Riviera owner, Ian Reynolds, and excited about doing something for his 50th year of life.

However, it seems impossible not to start at the end of this leg of Prime Mover’s adventure because – after arriving in Cairns in good spirits and flying back home for business – Andrew was forced to make a mercy dash as Category 5 Tropical Cyclone Ita started to bear down on the North Queensland coast.

“Well, I was told by my father Barry: ‘Don’t take the boat any further north of Hamilton Island – it still is cyclone season’. Well … he was right!”

“The evacuation plan ordered by the Port of Cairns was very well organised – our area in the marina had a dedicated creek and we were allowed to tie the boats into the mangroves to shelter from the winds which, if Cyclone Ita changed course and had a direct hit on Cairns, would have been 250-plus kilometres per hour (156mph). The plan was to stay out in the main river, to prevent the mangroves doing damage … and watch and wait to see what the cyclone was going to do …”

Alone on Prime Mover, Andrew made a mental note to take a helper next time.

“I was quite nervous … I was thinking do I stay in the river, move up the creek into the mangroves, stay with the boat, leave the boat? I was looking at all the computer weather models, they were all telling the same story – winds to only 40 knots. “

Lucky for Andrew and the rest of Far North Queensland, Ita crossed north of Cooktown and it was a “non-event” in Cairns, with only heavy rain and gusting winds. However, the biggest danger was unmanned boats dragging anchors and crashing into other boats.

“I had to move North along the river on Saturday to avoid being dragged into by two other boats already tangled together,” he says. “I was up and down many times at night over those few days checking around the boat, but went to bed on Saturday night with a strong outgoing tide and falling winds, resting easy that there would be no more unmanned boats likely to crash into me.”

Andrew woke on the Sunday morning to only a light breeze, and news that the marina had been reopened. He weighed anchor and had Prime Mover back in her pen by 9.30am … and arrived back home in Melbourne at midnight … tired but with a tale to tell.

It was a stark contrast to the four-week trek from Martha Cove, where Leg 3 of the journey began at 4.30am on March 5 with the new tender “Mini Mover 2” fitted, retired employee Stewart Earwicker on board and one stop to pick up Warren Neale at Sorrento before heading down into Bass Strait, bound for Bermagui on the NSW Coast.

“With a SW swell we made good time to Refuge Cove at Wilson’s Promontory for a barbecue, we headed out across the paddock for the all-night drive to Gabo Island. With a very sharp 1.5-2.5m following sea, Prime Mover was making very good time surfing down the waves and handling the conditions with ease.

As night fell, Warren took the first shift in winds up to 15-16 knots. “With no moon and no visibility outside of the boat, we were relying on the radar,” says Andrew. “We arrived at Bermagui just on 10am for our first fuel stop, with great service and a good fuel price from the local Fishermen’s Co-op – we had travelled about 350 NM in 24 hours, averaging 15 knots … wish it was this fast on all the trips. With smooth sea conditions we rounded South Head at Sydney Harbour, and anchored in Watsons Bay (Sydney) just before dark for a barbecue and a nice bottle of red wine.”

After catching up on sleep they then went sightseeing around Sydney Harbour, visiting such places as Hunters Hill, Sydney Fish Market and Darling Harbour. In Andrew’s words: “The houses in the older areas are stunning, and around every corner on the waterways there are another 100 boats – glad they don’t all use them at the same time! After a top-up of fuel we headed out of Sydney Harbour bound for Pittwater and Refuge Bay, where we parked in front of the waterfall, enjoyed a late dinner and went to bed ahead of an early start.”

The next day Prime Mover’s engines ran for 13.5 hours /230 NM and the crew was glad to arrive at Coffs Harbour just before dark. “One of the locals was very impressed how I could operate the boat by remote control,” says Andrew. Here Warren’s brother Rex from the Gold Coast came aboard ready to the run up to the Gold Coast, 162 NM north.

“Sea conditions for this stage of the journey were from the NE & East with the wind up to 20 knots, it was a bouncy ride,” says Andrew. “It was great to cross in through the Gold Coast seaway to smooth water and a scenic drive up the inland waterways, and along the Coomera River to Riviera where Prime Mover was booked in for some final adjustments. There, after farewelling Warren, they caught up with friends and enjoyed some time at the Riviera Yacht Club, catching up with the owners of two new Riviera 53 Flybridge models bound for Perth.

After bidding farewell to Warren and Rex, Prime Mover resumed its journey, cruising out through the Gold Coast seaway on with two new crew members Mark Slocombe and Paul Foster. They made good time to Double Island Point and waited for the tide to cross Wide Bay bar to Garrys Anchorage, where the mosquitoes ensured the rear door remained tightly shut.

Wishing Mark, Paul and Stewart had been able to find more time to stock up on supplies on the Gold Coast, Andrew scheduled the next stop at Urangan, then Lagoon Anchorage at the northern end of Fraser Island, waiting for the wind to drop before heading offshore to Lady Elliot and Lady Musgrave islands.

“We continued around to Sandy Cape to avoid the shallow water and rocks to do a bit of bottom bashing for fish and many were caught and returned. We even had the odd fish chasing our caught fish to the surface, eating them before we could reel them in. As we trolled on the way back into shore, Paul christened the port outrigger by catching a very nice spanish mackerel, which we landed in a very unorganised way. However, Paul is now talking about starting his own fishing show, releasing his own brand of equipment and franchising the brand Paul Foster Fishing Guru!”

The next day was to Lady Musgrave, which Andrew had not visited since 2008 with his Dad and Matthew and Lily Smith. “What a beautiful place – we walked on the island viewing the many birds nesting in the trees, snorkelled and travelled around the lagoon in Mini Mover 2. We travelled out to the outer edge of the lagoon in very clear water and saw lots of turtles.”

The next few days were spent island-hopping: Great Keppel Island where they cheered on Daniel Ricciardo at the Australian Grand Prix, and Middle Percy Island where the local yacht club is an old “A” frame hut where some new names were added to the souvenirs dating back to the early 1960’s, followed by a late afternoon cruise around the foreshore in Mini Mover 2 spotting all the goats and the occasional turtle. It was then on to St Bees Island and Keswick Island, where they were amazed by the number of houses and afterwards Scawfell Island for a late lunch and then Goldsmith Island and Thomas Island.

With wind increasing it was decided to stop for a few days at Hamilton Island in Queensland’s scenic Whitsundays for a few drinks at the yacht club, to admire the other boats and, when it stopped raining, to do some maintenance. It was here Mark bid farewell and returned to Melbourne for work.

Wet weather continued for the slow cruise up to Whitsunday Island, and into the next few days. “As we departed Nara Inlet we viewed the waterfall at the northern end of the anchorage cascading down,” says Andrew. “I have been going to the Whitsundays for 15 plus years and never seen any water running down the rocks!”

On arrival at Butterfly Bay, it was only Prime Mover and a large catamaran in the normally very crowded anchorage. “The guys on the catamaran produced two guns, and started clay target shooting off the back of the cat … not sure if this is legal!”

Prime Mover then made great time to Magnetic Island, pulling into Horseshoe Bay with plenty of time to spare to tour the village’s main street and watch as swallows tried to claim Mini Mover 2 as a new nesting ground.

The next stop was the idyllic Hinchinbrook channel, where Andrew records that he would dread doing the maintenance on Lucinda’s three-mile long, disused wharf and that the fishing competition was now on between Paul and himself on Mini Mover 2. Score after 45 minutes? Paul 5 v Andrew 0 (plus down a good rod after putting too much effort into a cast … and also receiving plenty of welcome advice from Paul: “Andrew it would be cheaper for you to go and buy a trout farm …”

Prime Mover made a quick stop at the marina at the northern end of Hinchinbrook the next day to visit Warren’s mate, Dave, en route to Dunk Island. “Dave showed pictures of his place after Cyclone Yasi in 2011, with his boat and 50 others sitting on his front balcony.”

The devastation of Yasi was also evident at Dunk Island which, at first glance, looked to be in reasonable repair. “Well how things changed once we went ashore and I put my glasses on … Cyclone Yasi shut the resort down in 2011 and I cannot see it reopening.”

It was then only a short drive of about four hours to the “very expensive” Cairns marina, but Andrew noted that it was ideally located in the city, which meant for a great final dinner to cap off the North East leg of the journey.

The next leg of Prime Mover’s circumnavigation of Australia is Cairns to Darwin. Stay tuned to Experience for updates. 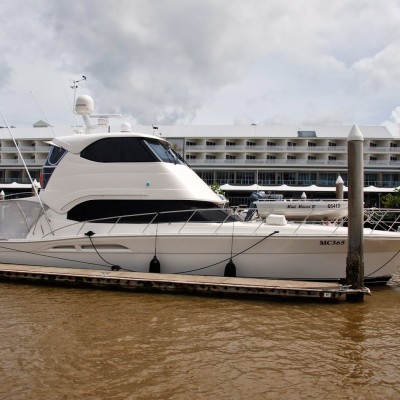 Day 36 A smooth morning run into Bermagui for refuelling 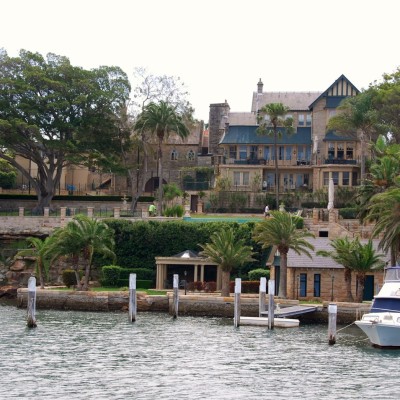 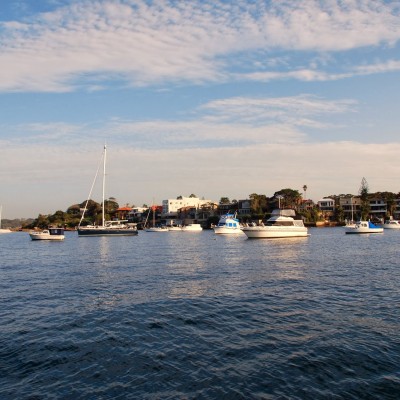 Day 40-41 outriggers being fitted at Riviera 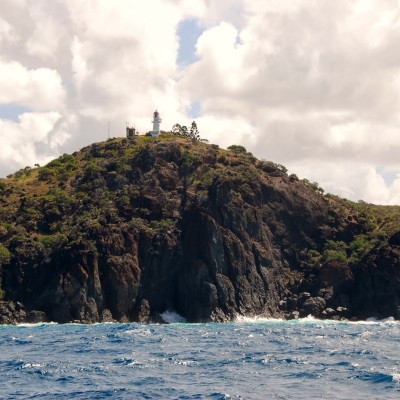 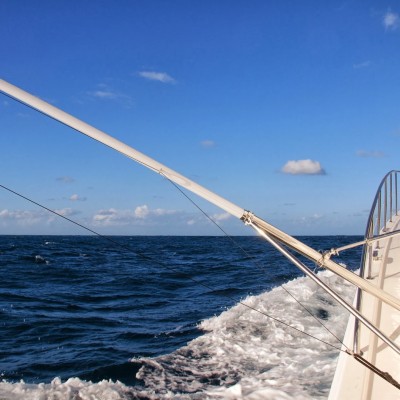 Day 42 outriggers in use 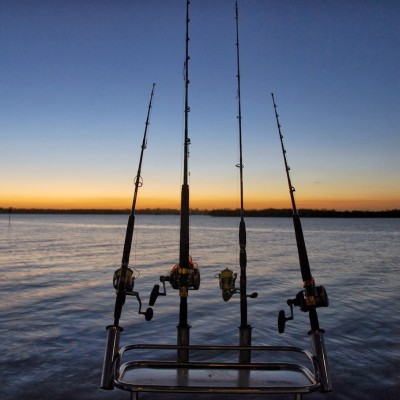 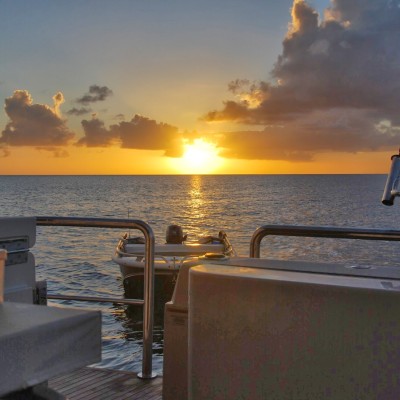 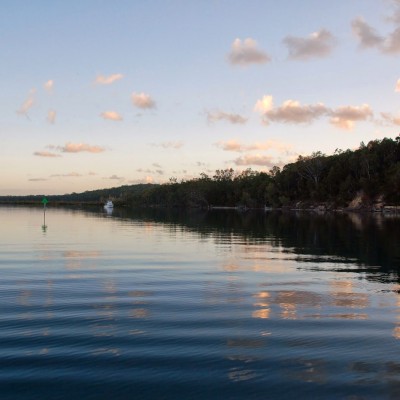 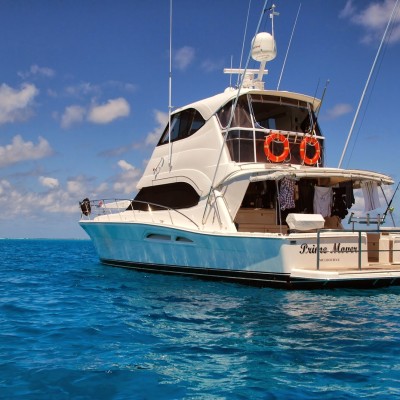 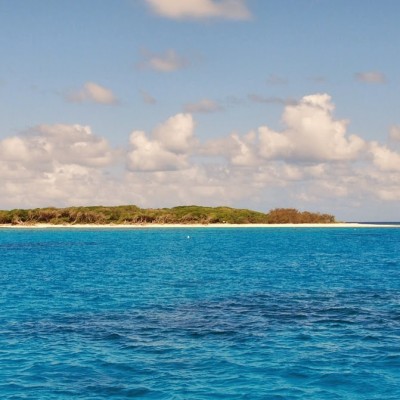 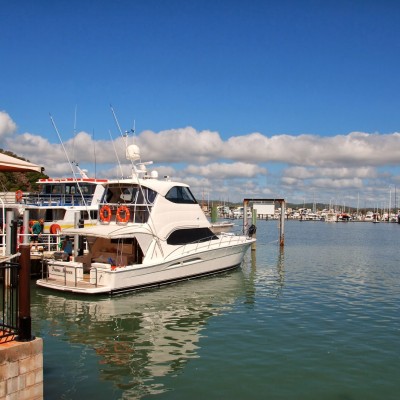 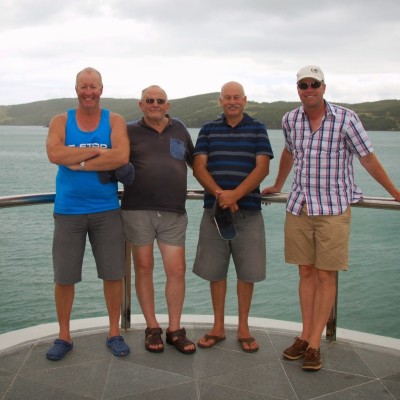 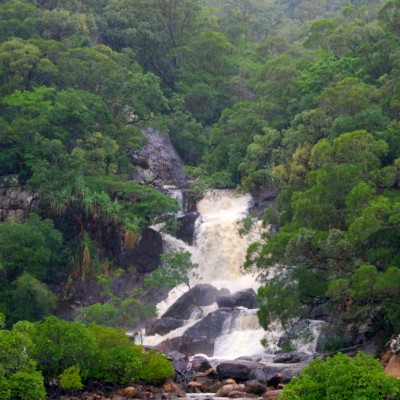 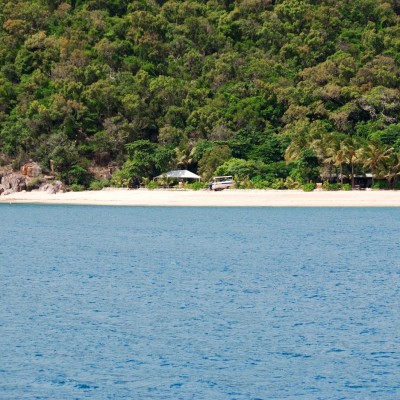 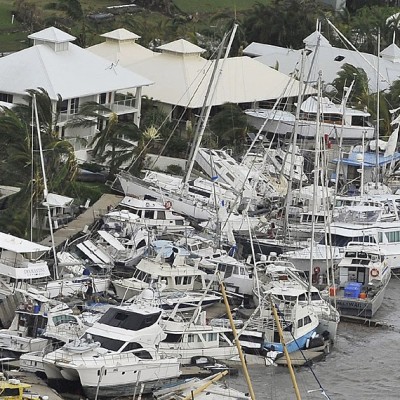 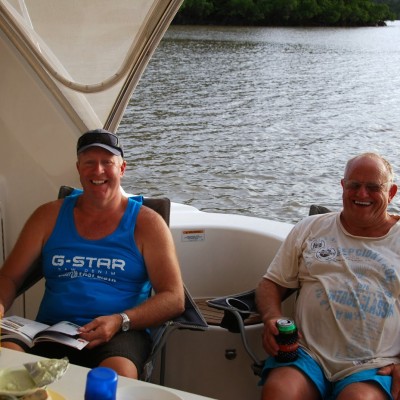 Day 55 Boys laughing at me for losing the fishing rod 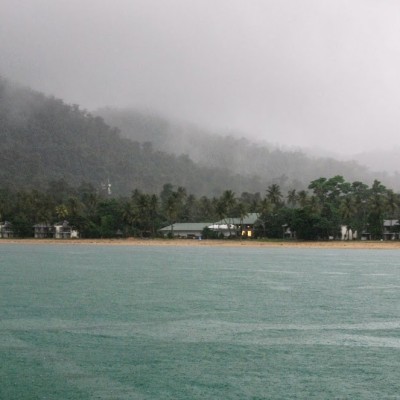 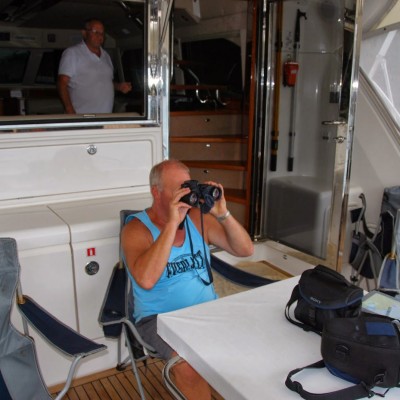 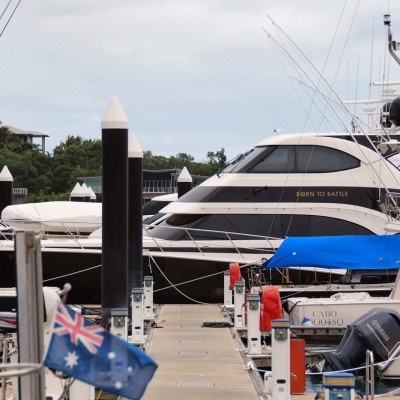 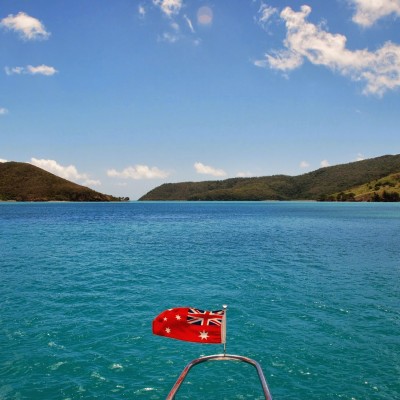 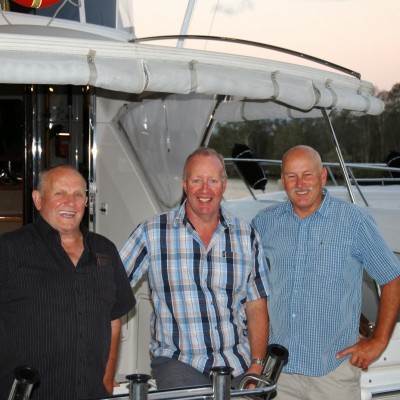 Stewart with the new crew